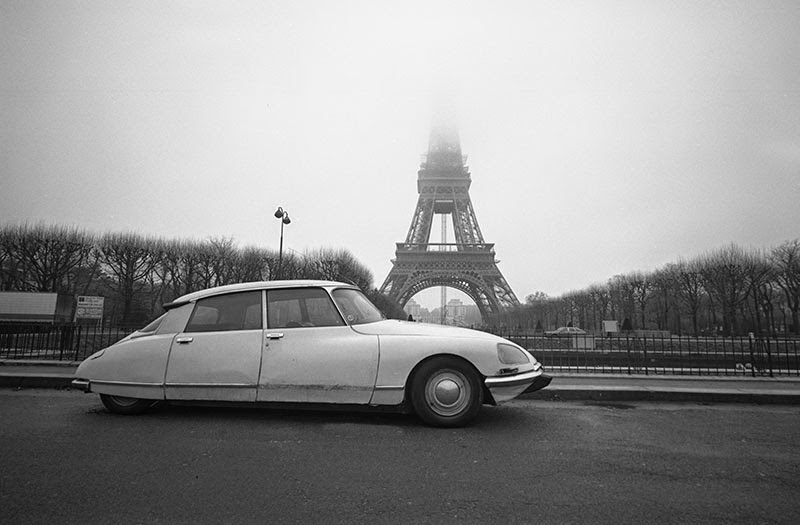 When I was in college, one of the professors had a French car called a Citroen DS. It was bright yellow and very distinctive looking. I became fascinated by the Citroen and found out that it was an extremely innovative car.

When it came out in 1955 it was years ahead of other makes in handling, braking, and styling. It was one of the few front-wheel drive luxury cars of the era. I test drove one at a Wichita dealer in 1970, but decided not to buy it simple because I needed a pickup more than a French luxury car. For about the same money I got a new Ford F-100.

The DS series remained in production until 1975. It came in second in a vote among auto journalist as the most beautiful car of the 20th century.

When Louise and I visited Paris in 1983, the city was fogged in for the entire week we were there. We never saw the top of the Eifel tower, but we looked everyday just in case the weather cleared for minute and we could get a glimpse of the top.

One day as we were walking by I saw an old Citroen DS sitting by the curb. By 1983 the DS was just another old car, but to me it was a find. I got out my old Plaubel Veriwide and made one exposure of the Citroen and the fogged in Eifel tower. It has become one of my all time favorite photos.

Plaubel was a German specialty camera manufacture. They made less than 2,000 Veriwides between 1959 and 1965. It had a 47mm Super-Angulon Schneider lens which gave a 100 degree coverage on a 6x10 cm frame. This is seven  shots on a roll of 120 film.  I don’t recall ever seeing another one other than the one I had. I owned it for about 10 years and have a lot of great photos that I made with that camera including this Citroen/Eifel Tower photo. I think I traded it to C&J Photo for a new Canon SLR in the late ‘80s.