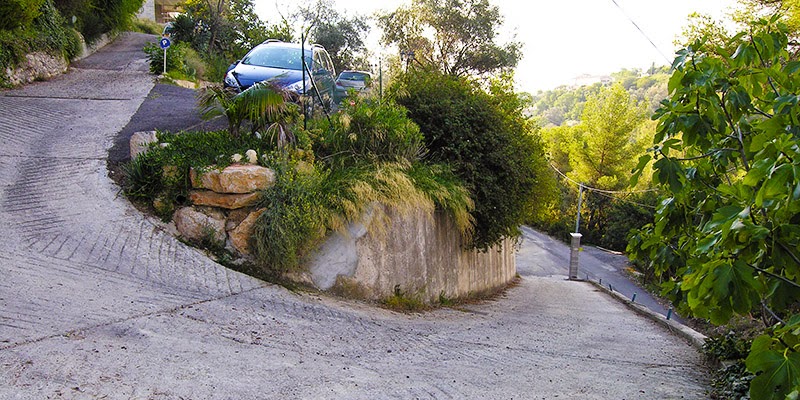 It was late afternoon when we drove into Nice. We still had plenty of time to find our hotel and go out for dinner. The directions we had turned out to be less than reliable as we drove around looking for something that sounded familiar. We were also confounded by the lack of street signs. Very few streets in Nice are marked, and when they are the system seems pretty random. We eventually stumbled across a sign that was on our map and by combining our wits we were reasonably convinced that we had found the street leading to our inn.

The web-site said the small inn was close-in with great views of the city, so we knew we were looking for a hill. As the winding road started to climb our confidence soared. By now it was dark and we were all past hungry. But very soon the road narrowed to one lane and began to deteriorate. There was no place to turn around because the mountain was on one side a sheer drop was on the other. As the road got steeper I realized that we were losing traction. If I stopped, we might not be able to get going again on the loose gravel. Then we leveled off and there was a light. It was an old house. A lady came out with a couple of large dogs. We asked (in French) if this was Castel Enchante. She replied that we had passed it on the way up the mountain. She then walked over to the edge and pointed down.

Back in the car, we edged our way down the sloping road that seemed barely hanging to the side of the hill. Then we saw the small sign tacked to a post only visible from this direction that read “Hotel Rooms.” We turned in the drive which was about six feet wide and about a 45 degree angle up. I gunned the little diesel engine and popped the clutch. I then slammed on the brakes at the crest and slid into small spot inches from going over the cliff. We looked around and saw a light coming through the trees, so I dispatched my companions to see if this was really the Castel. They returned a few minute later while I was still gathering my senses, saying we had found it. They wisely chose to walk from there, since me or the car making it any further was anything but certain. I was told to just park the car in the parking lot and come on in.

I got out and surveyed the situation and realized that there was another equally steep and narrow road behind me. After a series of three-point turns, I climbed the hill and slid in behind an aging BMW. I figured that it either belonged to the innkeeper or a previous guest who decided that abandoning the car there wasn’t a bad idea.
We were shown to our room in the beautiful 16th century mansion where I collapsed on the bed. As I waited for the blood to return to my knuckles, going out for dinner seemed like the last thing I wanted to do. Instead we dined on wine and chocolate accumulated on the trip.

The next day we awoke to a find ourselves in a beautiful house with a lovely garden, and a gorgeous view of the city. After a great breakfast and conversation we decided it was time to see if we could make it down the hill. The world looks better when you are well-fed and the sun is shining. But in the daylight it was obvious that the Lord was clearly guiding us, because the road was every bit as treacherous as it had seemed the night before.

We drove along the Mediterranean to Monaco where we pretended to be royalty, eating like kings. On the way back we stopped in old town Nice for more amazing food, putting off as long as possible the trip back up the mountain.
By now we knew what to expect, but this time there were screams of terror from the back seat, with some suggesting that they might want to walk. I realized that the night before my companions were too scared to utter a sound. By the third day I was picturing myself battling it out with Al Unser on the Pikes Peak Hill-climb, as I smoked up the hill, sliding around the hair-pin turns with the Michelins clinging to the side of the mountain. I was not sure my companions would ever get in a car with me again.

The next day was to be the autoroute back to Paris, but we wisely chose to take some back roads, winding through vineyards and enjoying the people and culture of the South of France.

I understand that there are people who would rather stay home. Sorry, I would rather scare my friends in the back of a Toyota on the French Riviera.

Popular posts from this blog

I have been getting good feedback from my black and white photos that have been at Scooter's Coffee at College and Antioch for a few weeks. Then last Sunday, we went to Waldo Pizza in Lees Summit and hung a number of large color photos with musical themes. They will be there for two months. Be sure to go in for some great pizza and see my photos.

If you have a business or public space that would be available for an art display, let me know. We can talk about it. My photo of the old "Texas Top Hands" Flexible bus that I made while in Austin a few years ago was on the cover of the March issue of Johnson County Lifestyle magazine. This was their "arts" issue, so there was a feature about me and various arts organization in the area. The article about the Shawnee Mission Strolling Strings also featured my photographs. I have been planning to update my primary web site for sometime now. I finally got it up and running this week. I will be turning off the…
Read more

For example, I have owned about half a dozen Oldsmobiles including the gorgeous 1977 Ninety-eight above. GM came out with an ad campaigning declaring, "This is not your father's Oldsmobile," implying that the millions of Oldsmobile owners were all a bunch of old fogeys. They got the message and quit buying Oldsmobiles and a century old brand died, or more correctly, was killed by poor management and worse marketing. 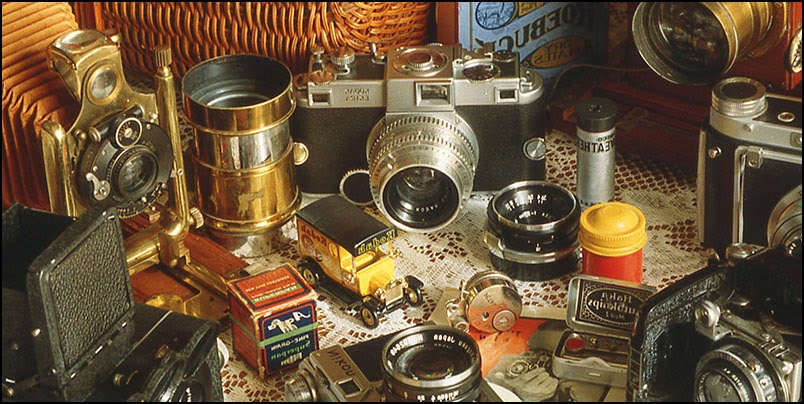 When I was in college I bought a couple of old Leicas just for fun. One was from the 1930’s and the other was post-war. Not what you would call modern cameras.
I started working for Kenny Young at Ben’s Camera Exchange in downtown Kansas City in 1971. Kenny was an avid camera collector and I got quite serious about learning about old camera and the history associated with them. I began by reading all the books I could find about the history of photography and cameras.

I heard about a book called “Glass, Brass & Chrome, a History of American 35mm Cameras.” I mentioned it to a customer who worked at the Kansas City Library. The next day he brought me a copy of the book. When I asked him when it was due, he said not to worry about. I read the book and put it on my bookshelf. Years later, after I became a Christian, I saw the book and realized that it was stolen from the library. I took it back downtown and dropped it in the book return. I then tracked down another copy of the book a…
Read more