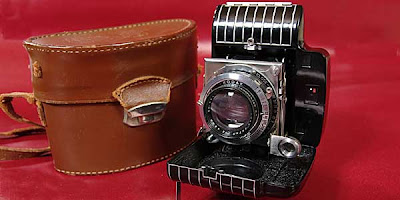 Last week was a sad one for those of us in the photography industry. The company once known as the "Yellow Father" filed for Chapter 11 bankruptcy. Chapter 11 does not mean that the Eastman Kodak Company is out of business, but if and when it emerges from Chapter 11, it will be a much different and smaller company that it was before.

When I teach the history of photography, I break photography down into three eras - before Kodak, the Kodak reign, and after Kodak. The twentieth century was the era of roll film and it was dominated by one large company. I can think of no other industry that was so dominated by one company for so long.

Many of us in the photography business looked upon Eastman Kodak as the benevolent grandfather who could do no wrong. Unfortunately most grandfathers eventually lose touch with the times and need somebody to just make them comfortable in their last days and EK seems to be at that stage.

George Eastman was a visionary who invented the method of applying photographic emulsion to flexible material. This made possible roll-film that led to the birth of amateur photography. He didn't forget professionals either, making ever higher quality films and papers for both amateur and professional users.

The empire he built later invented digital photography and made the first professional quality digital cameras. But this giant "cruise ship" of a company just couldn't navigate the treacherous waters of modern business. I sold my film processing business fifteen years ago when I saw that digital was the future, but fifteen years was not enough time for Kodak to adapt to the new course.

When we look back at the twentieth century, it may very well be that it was the era of the huge corporations. The accelerated pace of change is just not compatible with the way big business was done in the last century. Kodak is just the latest casualty to the old slow way of doing things.

Posted by Jim Mathis at 6:55 AM No comments: