Hold the camera at arm’s length so it is easy to see. 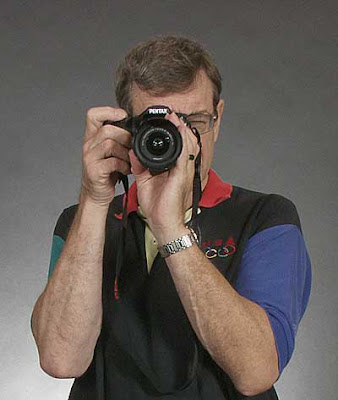 This is the third in a series on the biggest myths in photography.

"Hold the camera at arm’s length so it is easy to see."

I am not sure where this came from, but for some reason or another people, decided that they could see the image better on a little screen than could looking through a viewfinder. Camera manufactures quickly saw that they could save some money by eliminating viewfinders all together on lower priced camera. Today we find ourselves back to the same place where we were 100 years ago with the need to throw a dark cloth over the back of the camera to see the image for framing.

LCD screens are very difficult to see in bright light and often impossible to see on a sunny day with sunglasses.

People often ask me questions about what camera to buy. The first thing I always tell them is to get a camera with a viewfinder. Ideally it would be a DSLR (digital single lens reflex) but an electronic viewfinder is a good second choice. Even a simple optical “window” viewfinder is an improvement over an LCD screen. The LCD screens on the back of the camera are wonderful for reviewing your photos or for some unusual situations, but 99% of the time you should push the camera up to your face to steady it, and to be able to see exactly what you are getting in all kinds of light situations.
The proper way to hold a camera is illustrated above.
Posted by Jim Mathis at 1:59 PM No comments:

My pictures are just for fun. I don’t care what happens to them in a year, much less fifty years.

This is a second in a series of 10 posts about the biggest myths in photography.

Number 9. My pictures are just for fun. I don’t care what happens to them in a year, much less fifty years.

Part of my business is restoring old photographs. A common comment I hear is, “I wish my parents (aunt, grandparents, fill in the blank) had taken better care of these pictures. I guess they didn’t know they would be important.”

The best known photographer of the twentieth century was Ansel Adams. He was also a musician. He considered making a photograph the equivalent of writing a song – the composition. (Funny how the same word applies to both music and photography.) The print and its display is then the performance. Both were equally important. His photographs now sell for tens of thousands of dollars largely because he put care and technique into making his photographs.

We may not be Ansel Adams, but we can value photographs for what they are and take care in the making and keeping of them.

The digital age introduces its own challenges of storage and long term use. The important thing to consider is that someday people will be looking at your photos, or not, if you deleted them or lost them when your hard drive crashed, and trying to understand how you lived and what was important to you. Chances are the only record your great grandchildren will have of you is an old photograph or two. I know that because that is the only record I have of some of my great-grandparents.

Almost daily somebody will ask me what will happen to all the photos that are never even downloaded from the camera much less printed in some sort of permanent form. The answer is “nothing.” They will be gone in a few years.

Were they important? Possibly. Only the future will tell us what we should have saved and could have been discarded.
Posted by Jim Mathis at 7:27 AM No comments:

If I take enough pictures, some of them are bound to be good.

This is a first in a series of 10 posts about the biggest myths in photography.

Number 10 - If I take enough pictures, some of them are bound to be good.

This is related to the old saying about given enough monkeys, time, and typewriters, they would eventually write all the works of Shakespeare. Maybe. But it would take a LOT of time and they would go through a lot of typewriters.

Photography is a learned skill. It is not hard, but like any other skill such as woodworking, playing a musical instrument, or public speaking, it is not automatic, and therefore requires a little bit of training. Professional instruction is not necessary, but would certainly go a long way.

If I decided to build a table, I could go out and buy a saw, some wood, and start randomly cutting wood and gluing pieces together. Given enough time I might end up with something that looks like table. But I would save a lot of time and trees if I did a little research on the details of table making. It is the same with photography. A little care and knowledge goes a long way.

The Eastman Kodak Company has been struggling with this conundrum since they brought out the first Kodak in 1888. How do you convince people that anybody can take pictures and still provide enough training that they may actually make some good photos? Generally they have errored on the side of telling people how easy it is, and billions of people have wasted billions of dollars on lousy pictures in the past 120 years.

I recently saw an article about this in an 1892 photography journal. The writer was lamenting that people were expecting miracles in their photos without making any effort to become better photographers. In the digital age the incremental cost has gone way down, the quantity of pictures taken has gone way up, but the quality of photos hasn’t changed. If anything they have gotten worse.

Having spent 23 years in the photofinishing business, I have seen plenty of pictures that could have been a lot better with only minor changes. Most of the people wanted better pictures but apparently not bad enough to try to learn.