For a long time I have been interested in the idea of talent verses work. I believe that talent is over-rated and hard work is under-rated. Some research at Florida State University has born this out. FSU researches have determined that it takes about 10,000 hours to learn a difficult skill. In other words, to become a top golfer, surgeon, musician, or photographer, it takes about 10,000 hours of diligent work and practice.

If you practice every night during the week and all day on Saturday’s, you would reach 10,000 hours in about 20 years. If you are in medical school, 10,000 hours is about 5 years. So this number seems about right. And practice is not just piddling around. It must be diligent and disciplined work with a purpose.

A few people like Tiger Woods or Mozart were able to get in their 10,000 hours before they were 21 years-old so people called them prodigies. For others of us, it has taken many years to develop the skills that we need to be considered “talented.”

The top musicians I know can pretty much point to this number of 10,000 hours, along with the quality of the time spent, as the secret. Twenty hours per week for 10 years equals 10,000 hours for example.

In photography, great pictures are not a result of having an expensive camera, no more than a good golf score comes from expensive clubs. But rather, outstanding photos come from years of hard work and practice.

I got my first camera in 1958 and got my first job in photography in 1971. I have spent practically every day since then trying to make better photographs. That’s a lot of hours.
Posted by Jim Mathis at 7:34 AM No comments: 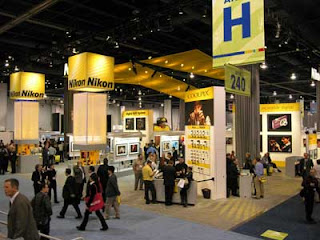 Thursday, March 5 started with a breakfast featuring Craig Newmark, the founder of Craigslist. http://www.craigslist.org/ I was surprised that he still worked in customer service of his own company. He hired somebody else to be CEO. That shows where his heart is. He started Craigslist in 1995 just to help people. They figured out later how to pay the bills. Craig's personal blog is: http://www.cnewmark.com/

I then went to a class put on by Franziska Frey who is professor at the Rochester Institue of Technology about archiving photos and long-term storage of digital images. She said that the magic number is five years. Make new CD's every five years and replace your hard drive every five years. After that you are at a greatly increased risk of loosing information. There is a lot of information about this kind of thing that is not commonly known. I will be adding links to Library of Congress sites from http://www.mathisphoto.net/ later.

I finished up the trade show in the afternoon, had an iced mocha at a local coffeehouse (not a chain) and took a cab to the airport. It was a good week. I now have lots of ideas and information to process and file in my brain.
Posted by Jim Mathis at 8:23 AM No comments: 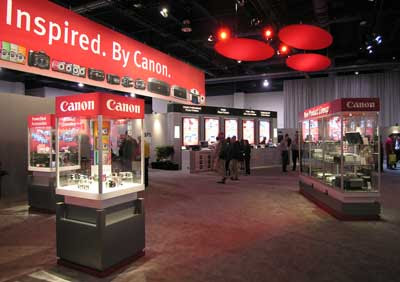 I started off today with a couple of workshops about bookbinding and printing. The best one was by some folks from the Hardcover Binders Association, a trade group. http://www.hardcoverbinders.org/

After that, I finally made it to the main floor of the trade show. Canon has now declared itself the world leader in digital imaging, and I didn’t hear anybody disputing that. As such, they claimed the most prominent and biggest space on the floor. They have a huge array of products from cameras to printers and in all prices from inexpensive to out of sight.

A number of the large manufactures such as Canon, Nikon, Sony, and Pentax were putting on demonstrations and shows featuring famous photographers and personalities. I thoroughly enjoyed myself and am looking f 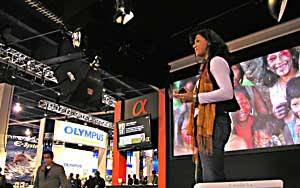 There were a few amazing products that would have been unbelievable just a few years ago. For example, Sony was showing a new camera that will produce true 220 degree panoramics in camera just by turning the camera during a 10 sec exposure. The camera seamlessly stitches together a series of images. The camera is under $500 and ships next month. Casio was showing a pocketable point and shoot camera that will shoot 30 frames per second. This can be easily converted to HD video.

Speaking of video, Canon, Sony, and JVC among others, were all showing super-small, gorgeous Hi-Def camcorders that use flash memory and are about the size of your fist. These manufactures were also showing portable DVD recorders that could be used to write directly from the video cameras.

I’ve enjoyed meeting photographers, dealers, and manufactures from all over the world.

After resting at my hotel, I had dinner at Bahama Breeze http://www.bahamabreeze.com/ and walked back to the convention center for the Beach Boys concert. The concert was wonderful. It certainly helped that the room had good acoustics. Mike Love and Bruce Johnston were the only two original members. At any rate, they sounded great and everybody left with big smiles.

I decided to take the bus back to my hotel. It is a twenty minute walk but the bus took 45 minutes. Deciding whether to sit for 45 minutes or walk for 20 is not an obvious decision.
Posted by Jim Mathis at 11:17 PM No comments: 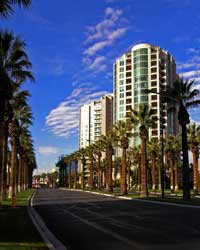 The first session of the day featured Stephen Burns, http://www.chromeallusion.com/ He talked about graphics software other than Photoshop. Virtually everyone in the group were Photoshop users, so he talked about what some other things could do differently. He specifically talked about Nik Software.

At 9:00 was the business meeting where five people were given special recognition for their contributions to the industry. The CEO of Nikon was elected to the PMA Hall of Fame. Geoffrey Moore then talked about disruptive innovation.

I went from there to the trade show. The whole photo industry has changed dramatically since the last time I attended PMA about 15 years ago. No one was showing photofinishing equipment, no new film or film cameras were introduced, but there are all kinds of new things never dreamed of before the past few years.

There are a large number of companies showing equipment for printing and binding photo books at all different prices and qualities.

Some companies such as Minolta, Konica, and Mamiya have disappeared altogether. Others have risen to the occasion. Sony and Panasonic didn’t even attend PMA a few years ago, now they are some of the stars.

After a good nights sleep, I awoke to watch the news of the snow storm that had blanketed the East Coast. Here it was in the mid-60’s with a clear blue “Sky Blue” sky. I walked along palm tree lined Howard Hughes Ave to the convention center. I had a nice breakfast at the convention center and went to the first seminar on dance school photography. It was very interesting.

The second seminar was titled “Being Photographic: Digital Books & New Forms of Photographic Expression.” The speaker was Frank Cost, a professor at the Rochester Institute of Technology. This was an outstanding talk. He pointed out that publishing is all about finding an audience for an idea. With today’s technology the audience no longer has to be large, it can be as small as one person.

The medium is the message, and a book is considered by just about everybody to be a high quality medium – thus the message is elevated just by being in book form.

The luncheon speaker was an author and consultant named Michael Silverstein. He talked about “Trading Up” what motivates consumers.

A message that came through from several sources was that for the past 120 years we have been in a routine. People bought a roll of film, they went home and shot 12, 24, or 36 pictures, then took the film back to the store. A short while later they picked-up their pictures, looked at them a few times and stuck them in a drawer. Now that routine has been disrupted and people don’t know what to do.

Most people keep trying to do the same old thing, such as printing 4x6 prints from their digital files, just with new technologies. Creative people look for new ways to use not only the new tools, but the old ones as well.

As an example, in the afternoon I went to a class put on by a couple of fine artists who have been using digital imaging for about 20 years. They are constantly exploring new ways of using ink-jet printers, making one of a kind and extremely limited edition art books, as well as very large prints on a variety of materials. They were Dorothy Simpson Krause http://www.dotkrause.com/ and Bonny Pierce Lhotka http://www.lhotka.com/ There studio is http://www.digitalatelier.com/

They had some amazing samples and pictures of commercial art and displays they had done. Bonny Lhotka was particularly into 3D imaging using lenticular lenses.

The next seminar was on optimizing web sites for search engine results. They covered both natural search results (SEO) and paid search results, and how they can work together. Some of these things I knew, but the class filled in some gaps in my knowledge.

The last seminar of the day was about selecting a photo book printer. One presenter was a photo book specialist with Xerox, Brian Segnit and the other was with Fuji, Thomas Curley.

Arrived at Las Vegas airport at about noon and walked to Tuscany Suites Hotel. Since I didn’t know where I was going, I was carrying one bag and pulling another, and it was pretty warm, it was a long walk. It may have been about two miles.

After lunch at the hotel, getting settled in my room and resting a little, I walked to the convention center. This was about a 25 minute walk, probably about a mile and a half since I walk about 4 miles and hour.

The first workshop was called The Seven Rings of Photo Books. It was not particularly interesting, but a bit of an introduction to photo books. What I learned is that most people haven’t heard of specialty photo books and if they have, they are sort of beyond their understanding.

Innovation always starts with the customer. Find out what they want.

He cited Smith Corona as the world’s best typewriter company, but they saw no need for computers. They ultimately failed.

I walked back to the hotel stopping at Gordon Biersch Restaurant-brewery for a crab cake sandwich and a locally brewed brew. http://www.gordonbierschrestaurants.com/
Posted by Jim Mathis at 10:04 PM No comments: